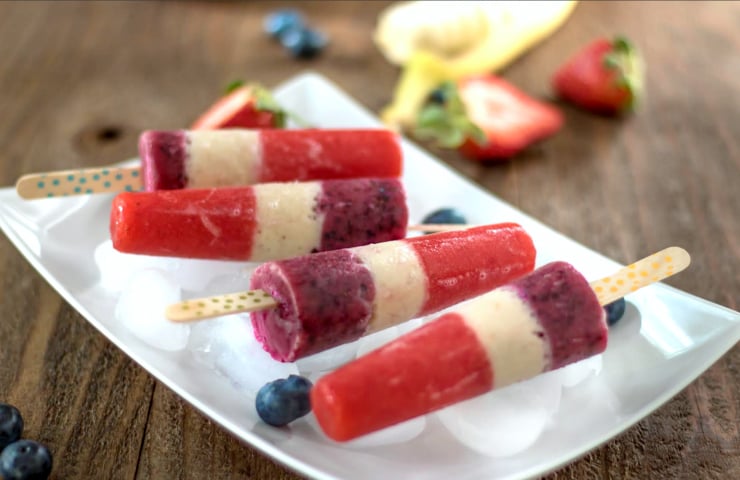 
With Independence Day upon us, we bring you this fun trivia, but also a refreshing, delicious and festive 4th of July Ice Pops recipe that is tasty and healthy! 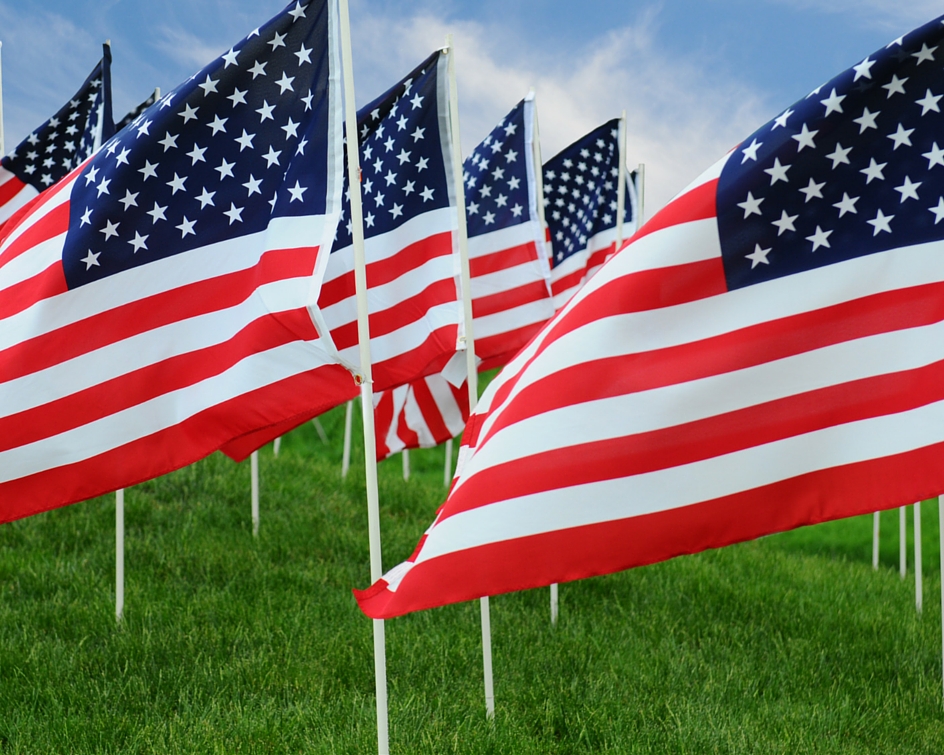 With the 4th of July upon us, summer in full observance, I thought it would be cool to bring you a refreshing new recipe perfect for celebrating this holiday: July 4th Ice Pops!

But first, let’s look at some 4th of July trivia to help us kick off the celebration of America’s Independence!

1. On July 4th of what year did the Continental Congress approved the final wording of the Declaration of Independence?

2. The deaths of whom on July 4, 1826 inspired the celebration of Independence day?

3. Which US President was the only one to be born on July 4?

4. In what year did congress recognize Independence Day as a national holiday?

5. We hold these truths to be self-evident, that all men are created equal, that they are endowed by their Creator with certain unalienable Rights; that among these are Life, Liberty, and the pursuit of Happiness, is found where?

a. The constitution
b. The Declaration of Independence
c. The Virginia Wig Cabinet Papers
d. Statute of Virginia for Religious Freedom

6. The Declaration of Independence did what?

a. Declared our independence from foreign oil
b. Told Americans to drink coffee, not tea
c. Promoted the idea that each person should think for him or her self
d. Told the British Crown that Americans would be self governing

7. What is the major difference between a democracy and a constitutional republic?

a. They are the same
b. In a democracy democrats rule congress, while in a constitutional republic republicans rule congress.
c. A democracy means everyone votes and everyone’s vote counts the same nts the same while a republic is where people choose representatives who, in turn, make policy decisions on their behalf but the decisions must remain within the framework written in the constitution
d. In a democracy everyone must be happy so no one is left out, while in a constitutional republic, people can be unhappy because it is in the constitution.

8. Who wrote the pledge of the allegiance?

9. What is the magna carta?

a. One of the earliest drafts of what would become the United States Constitution
b. A dish from Italy
c. The newest version of the Bill of Rights
d. Congress’ formal term for vacation

10. What is one of the major reasons the US declared itself independent from the British Crown?

a. The people wanted to drink coffee, not British tea
b. Taxation without representation
c. Patrick Henry pissed people off
d. James, the Duke of York, could no longer handle the colonies

See the quiz answers below this awesome summer fun, Independence Day-inspired treat I prepared for you all – Patriotic Ice Pops!

To celebrate 4th of July, I thought it would be perfect to bring you these refreshing patriotic ice pops! With three fun, colorful layers of red, white and blue, these ice pops make a perfect 4th of July snack! 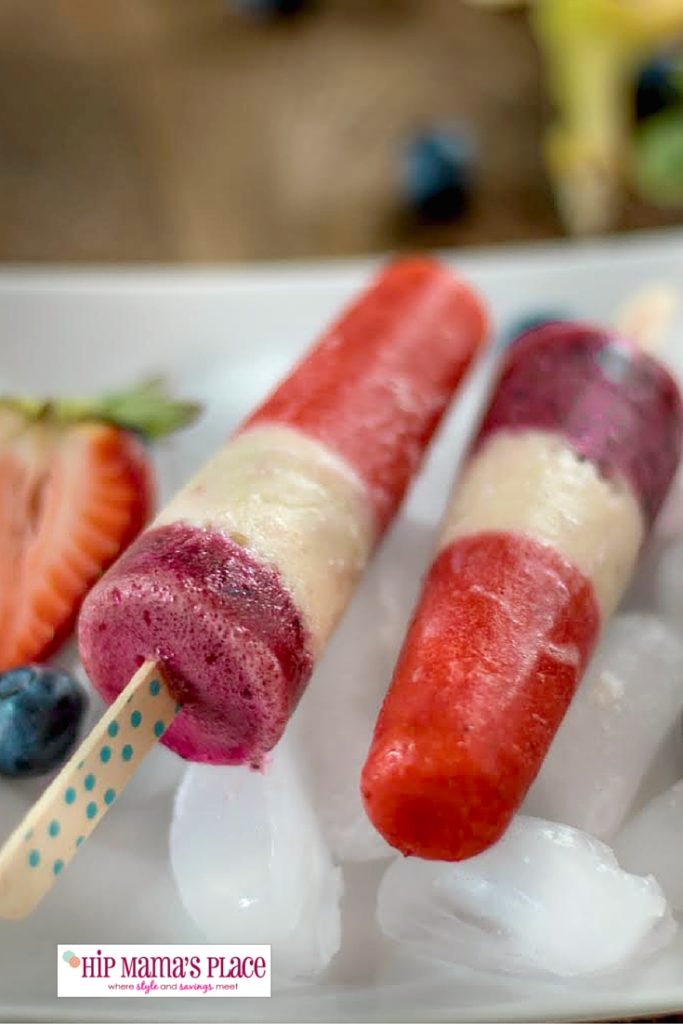 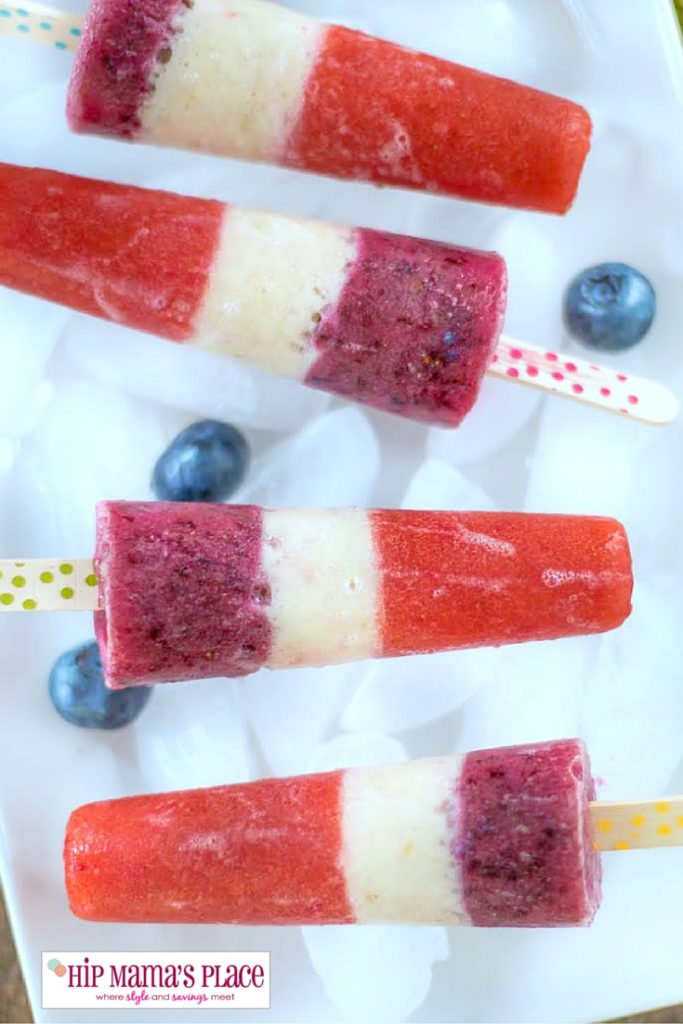 With three fun, colorful layers of red, white and blue, these ice pops make a perfect 4th of July snack!

For the Strawberry Layer:

For the Banana Layer:

For the Blueberry Layer:

For this recipe, I used the banana layer as the second layer. Since it’s thick, it helps hold the stick up.

When it comes to finding unique ways to commemorate the holiday, I love to bring in the spirit of the 4th, so while my kids would love a day of complete freedom, I do still need to be the parent, but I also can find cute ways to make everything the week of the 4th be in theme. We love the fireworks, and actually all summer long, we can keep the spark alive with these patriotic and healthy 4th of July Ice Pops. They’re great after a day in the back yard, and since they’re full of real foods, and have no artificial flavors or colors, they’re healthy, too!