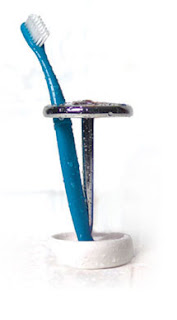 If you’re like most people, you get a new toothbrush every six months, but you really should be changing your toothbrush more often, like every three to four months. When the bristles get worn and lose their rigidity, they don’t remove plaque as well. But you should also do some maintenance within that three months, when your toothbrush is just sitting out in the open. After all, think about all the germs and bacteria floating around that would love to attach themselves to your moist toothbrush.

According to Reader’s Digest, you should, once or twice a week, run your toothbrush through the microwave on high for 10 seconds immediately before brushing. Dental professionals suggests you could instead wash the head of your toothbrush with boiling water. Either way, this works well in preventing colds, flu, and other sicknesses. If someone in your home is sick, you may want to sterilize it in the microwave or with boiling water each time you brush. If you’re the one who’s sick, after the illness passes, immediately replace your old toothbrush with a new one.

« Babycapes: Innovative Outerwear for Little Ones (And A Giveaway Too!)
LogicBright CRM Contact Manager »